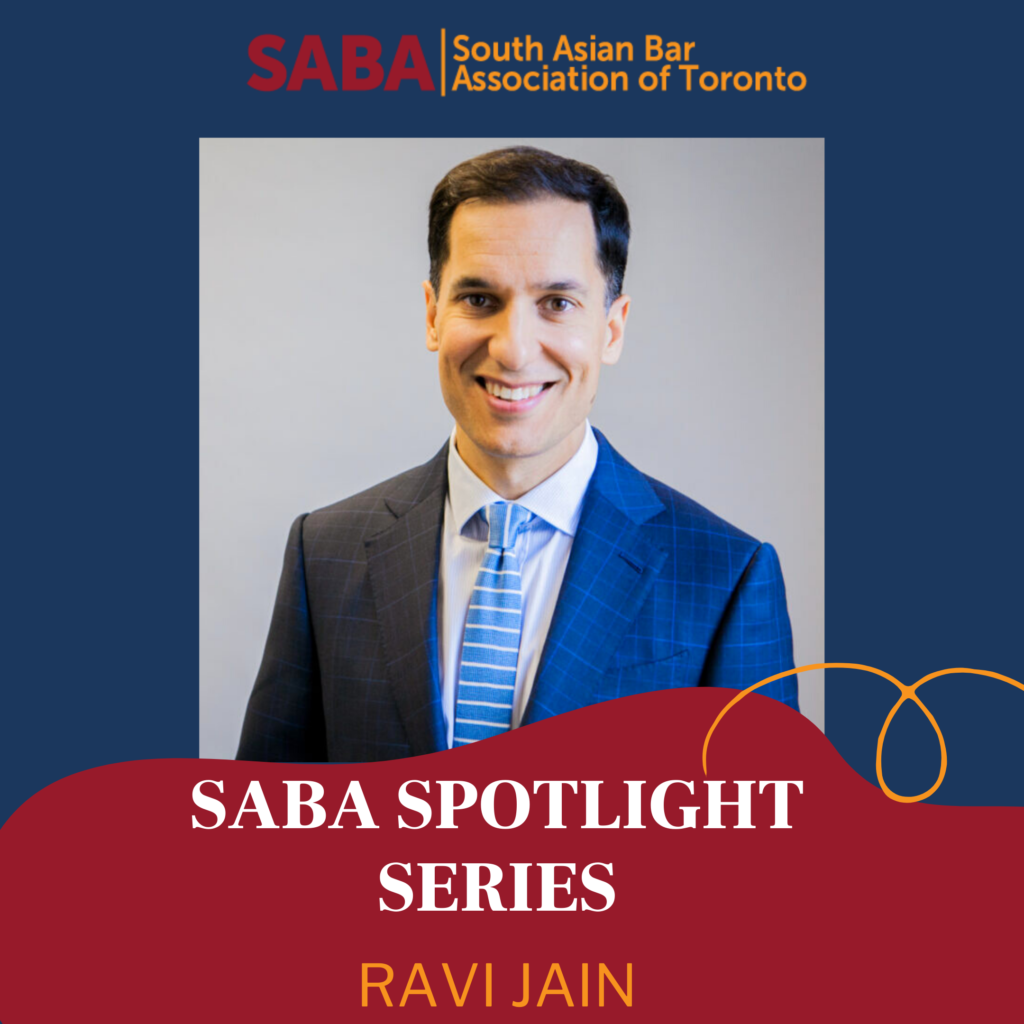 Ravi Jain is a Managing Senior Lawyer at Green and Spiegel LLP in Toronto. Called to the bar in both Canada and the United States, Ravi is among a small percentage who are certified by the Law Society of Ontario as Specialists in Immigration Law.

In recognition of his significant contributions to Canada, Ravi was presented with the Diamond Jubilee Medal by command of Her Majesty the Queen. He has also been selected as a leading immigration lawyer and “Thought Leader” by Who’s Who Legal, The Canadian Lexpert Directory, Chambers and Partners and Best Lawyers in Canada, which just named him “Lawyer of the Year” for Immigration Law.

This year marks Ravi’s second year on the SABA board. Ravi regularly visits India and enjoys travelling there. He is a fan of Akshay Kumar movies.

1. What drew you to immigration law? Did you imagine doing anything else?

I love the people and the stories the most. It’s extremely rewarding to assist people with what is the most important matter in their lives. Clients have spontaneously hugged me when receiving a ‘bench positive’ decision at the end of litigation and reuniting families and facilitating smooth corporate transfers provide much satisfaction. Lately, I’ve been active leading the Canadian Bar Association Immigration Section and setting up a complementary new immigration lawyers’ group: the Canadian Immigration Lawyers Association (which will provide timely comment to Ministers, civil servants and the media, effectively build coalitions, do test litigation, operate as a think-tank and engage in lobbying).

2. How did you come to be involved with SABA?

Many years ago I started by attending some networking events and then signed up as a mentor and then I requested that the Advocacy Committee endorse a position I’d developed for the Canadian Bar Association which the Board at the time approved. It’s an honour to now sit on the Board.

3. Do you have a favourite memory from being part of SABA?

The in-person galas of course! The best part is meeting friends over cocktails prior to the main event. Lately, I’ve enjoyed getting to know some very talented fellow Board members.

4. What do you like to do during your down time to relax?

I enjoy travelling with my wife, playing with my kids and relish tennis followed by a drink catching up with friends.

6. Who or what inspires you?

My father inspires me. He was a professor and was invested into the Order of Canada for his ground-breaking research citing the benefits of diversity in employment and the importance of removing non bona fide job requirements. He was very active in the community, establishing a Mayor’s Race Relations Committee that was replicated across Canada and also at the federal level as Commisisoner of the Canadian Human Rights Commission and internationally, developing employment equity policies at the end of apartheid at the request of President Mandela’s government.