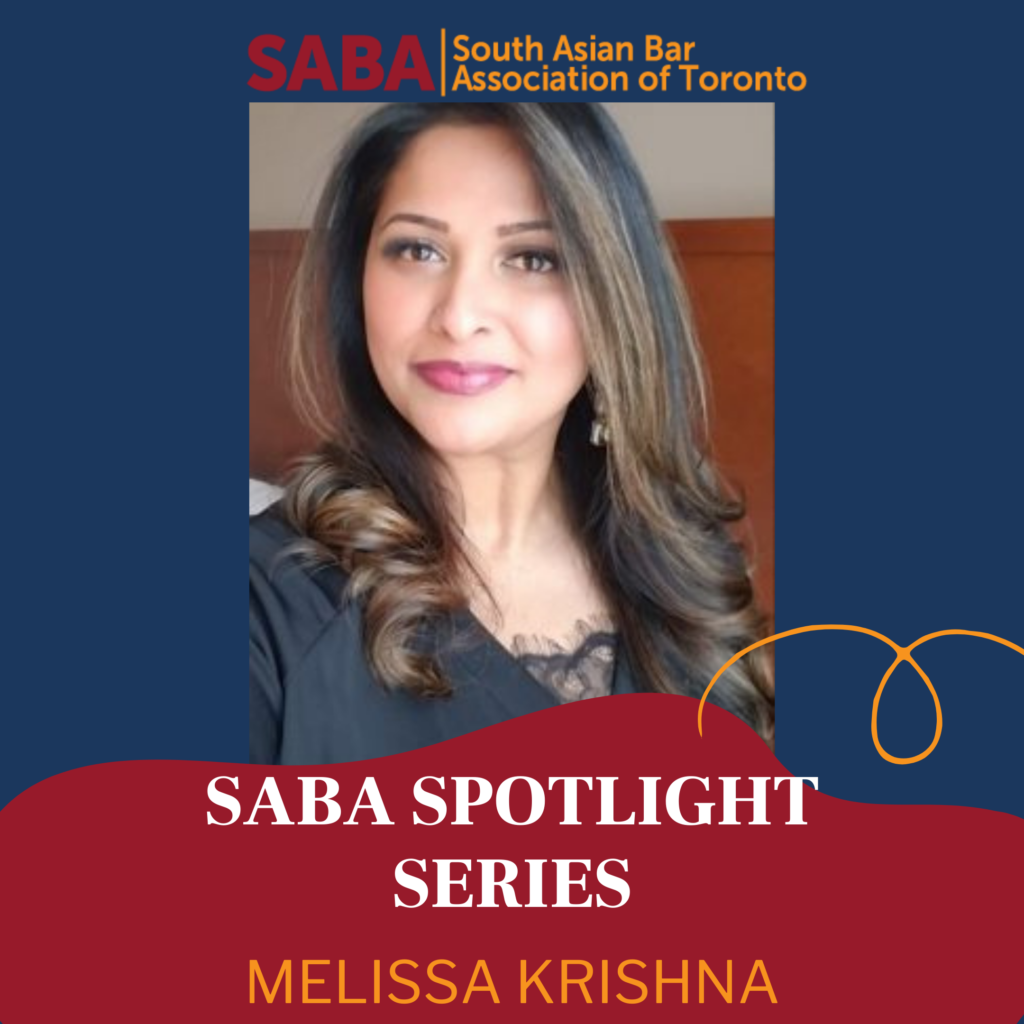 Melissa is a South Asian lawyer who moved to Canada from Bangalore, India, at the age of 11. Melissa is the Associate General Counsel at BentallGreenOak (Canada) Limited Partnership, a global real estate investment company. Her role requires her to wear many different hats including negotiator of commercial contracts to manager of real estate transactions to advisor on employment matters with respect to the company’s nearly 1,500 employees.

Melissa is a former board member of SABA. She enjoys volunteering, hiking and Bollywood dancing. In addition to English, Melissa speaks Hindi and Kannada.

1. Is your current career path what you originally intended?

Yes and No. In high school, as part of the co-op program, I did a placement at a lawyer’s office and knew after that that I wanted to be a lawyer. However, in law school, I was convinced I was going to be a tax lawyer until I got to spend some time in the tax department during articling and realized that it was not for me.

2. What are some moments in your career that you are proud of?

I led the largest M&A deal that was undertaken by the oil and gas company I was working with a few years ago. The deal involved the acquisition of a company that was listed on both the Toronto stock exchange and the Colombian stock exchange. As such, there were many regulatory challenges as well as deal complexities. The deal won the company a Dealmaker award and my work on the deal was instrumental in making me a finalist for the Tomorrow’s Leader Award.

3. What’s your favourite memory from being part of SABA?

One of the things that I cherish from being part of SABA is the fact that we instituted a mentorship program this year. Having benefited from informal mentors, I’m very passionate about mentorship and am thrilled that we are able to leverage our large membership base to create such relationships to empower and enrich young lawyers. I have generally thoroughly enjoyed my time on the SABA board because of the smart, engaged and dedicated lawyers that form the board.

My all time favourite South Asian snack is probably my mom’s medhu vada. I’ve never had a vada that is more crispy or perfect than the ones my mom makes!

5. What was the best advice you received about the practice of law?

I was told to try to give the other side the benefit of the doubt and to understand what is motivating them to argue the point that they are making – this has helped me significantly in not only resolving negotiations amicably but quite often, in my favour.

As an articling student, I was told: “No one expects you to know any law at this point, the best thing you have to offer is your reliability”. This advice has served me well throughout my career as I try to ensure my clients (internal and external while in private practice) feel that they can depend on me.